Zizzi’s is one of those restaurants that have completely nailed their target market. They cater exactly for the easy dinner crowd. Whether it’s a staff night out, a family birthday party or a trip to town with the girls turned into a boozy lunch, you know exactly what you’re going to get and that there’ll be something on the menu to suit everyone. Before I went vegan I think I probably took places like this for granted, places that you could just fall into with a big group of people and everyone would be happy. Eating has always been a huge part of my social life and I have to admit that I have been anxious about eating out in groups of people, I don’t want to be the awkward one, but at the same time I don’t want to eat another dry falafel burger or even worse just a bowl of chips. Newcastle has a plethora of vegan and veggie restaurants but it’s unlikely you’re always going to get everyone to eat in those so it’s handy to have some ideas for places you can go in a big group. This is also handy for when you visit other cities for things like hen nights etc, if all else fails you can always go to Zizzi’s.

You really have to admire Zizzi’s new vegan menu.

Though it’s not expansive the addition of vegan cheese on the pizza is just a sheer thrill. That they haven’t just omitted an ingredient but have actually gone out of their way to create something especially for vegans this is genuinely exciting! They also do a gluten free vegan option so for the poor souls who are vegan AND gluten free can finally have a pizza!

So to our trip,

We came for a lunch after grabbing some bits in town. I’ve been suffering with wisdom tooth pain and have been quite whingy so wanted something to cheer myself up. We decided not to do starters and go for straight for the main course.

We both went for the vegan margarita and added some additions. I had artichoke, peppers and extra pizza sauce added to mine and Andy had peppers and chillis added to his. 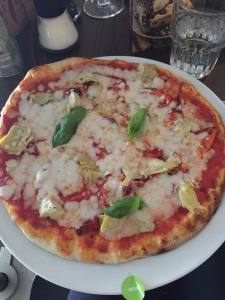 When it arrived it was a good size and had generous portions of the extra ingredients. The cheese was very decent but tasted more like a bechmal sauce than a mozzarella, this however made for a very tasty pizza.

We shared a carafe of a red wine and we’re happy to see that most of their wines are vegan too, something that a lot of places manage to leave out.

I was happy that I hadn’t had a starter as it was just the right amount of food for me. Well once I had pudding as well it was.

For pudding we both went for the Vegan Necterine which was a baked Necterine with coconut and mango ice cream. It was delicious. 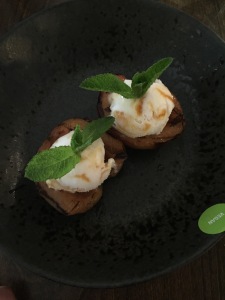 My only complaint which is a bit of a pet hate of mine was that it was served in an unglazed stone bowl so when your spoon grated against the side it set your teeth on edge, especially not nice mixed with ice cream and wisdom teeth pain but I imagine this is a pretty niche moan, and didn’t affect the quality of the experience at all.

The bill came to £40.75 for two mains, two puddings and a carafe of wine. I know they do one free main if you have a tastecard and they often do deals on voucher sites.

Overall I was impressed with the quality of the food and the overall experience. It’s definitely going to the top of the list of places to go with a group of people. I didn’t feel like the vegan menu was an afterthought, and I was happy with what we got for the money. Sometimes when you visit an Italian as a vegan it feels like you’re being ripped off as you’re often charged full price even though they basically  give you a bowl of pasta and a tin of tomatoes or a pizza base and some tomato purée, this did not feel like that at all.

Well done Zizzi’s, I can’t wait to see what you add to the menu next! 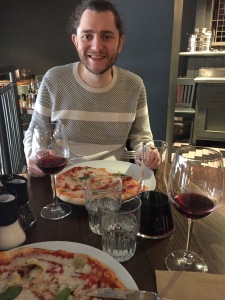