It’s a cliche for a reason, bacon is  my weakness. Many a spell of being vegan or veggie in the past have ended with me biting into a hot bacon roll, it’s so predictable that it’s sad.

I was brought up veggie so I am familiar with bacon substitutes, the fake bacon of my childhood still makes me gag thinking about it. Thick cut, beany, with a fake smoky plasticy taste, like someone left a bacon flavoured crayon on a radiator. Vile, but that was 20 years ago so you’d hope that the world of bacon substitutes would have moved on somewhat since then.

With most substitutes I find that they work better if you don’t expect them to taste like the original, you need to judge them in the their own right. I think of them as things that can be eaten in place of, rather than things that taste like. So with this in mind I went looking for something I could happily eat hungover and with loads of ketchup.

I bought my Cheatin Bacon from the Honeytree on Heaton Road

I love this shop, and it’s so handy for me being just down the road.

In order to test the Cheatin Bacon I decided to a traditional, no frills, bacon sarnie. 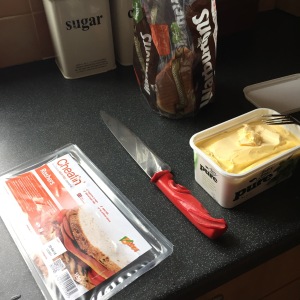 The bacon was easy to cook, you just fry each side for a minute and a half, I used the pure soya spread as oil because I’m lazy and I already had it out of the fridge. I only used half a teaspoon as I don’t like greasy bacon anyway.

When it was cooked I piled it on some bread that I had smothered in soya spread and tomato sauce, pretty standard sarnie craic. 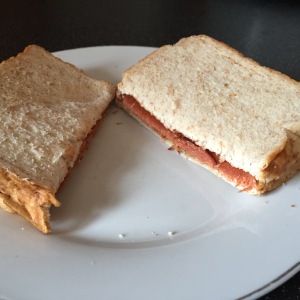 The bacon was very pleasant, not the horror of veggie bacon past. It had a crunch to it and a faint ‘bacony’  taste. Certainly did the trick as a filling in a ketchup sandwich.

Did it taste like bacon? No, not at all, and I wasn’t really expecting it to but it was nice in its own right.

Would I buy it again? Definitely.