I never realised before I became vegan that the word ‘bacon’ could actually be an entire argument. Then suddenly after becoming vegan everyone seemed to be using it, someone would ask how my veganism was going, I’d say ‘well thank you’ and they’d say ‘yeah but bacon’.

I believe in my reasons for turning vegan, I truly care about animal welfare and I don’t want to be an active part in an industry that enslaves and tortures animals anymore. I just don’t. HOWEVER, I am a rational human being and I understand that this is not everyone’s choice, and though I would love the world to hold hands and decide that seeing as we have the technology and the ability to live a full, healthy and happy life without the mistreatment of animals then why wouldn’t we, I can see that this is very unlikely to happen any time soon. I am not offended by meat eating, there’s no need to hide it or be defensive of it, I ate meat for years and years and I understand that it’s delicious, but get this SO IS VEGAN FOOD. I just ate chocolate spread out of the jar with a spoon (I’m hungover and it’s a Sunday, so sue me) and it was amazing, AND no cows had to have their babies taken away from them to make it, extra delicious! There’s no need to justify choices, I’m really not arsed what other people do, but bacon is not an argument.

Except maybe this bacon. This bacon is a genuine life changer! LIFE. CHANGER.

Please let me introduce you to

2 sheets of  Rice paper (the kind you get in the Asian Supermarkets to wrap up spring rolls, for those of you in Newcastle you can get this from the one opposite The Gate)

1 tablespoon of oil of your choice (I like olive)

1 teaspoon of liquid smoke (I got this off amazon) 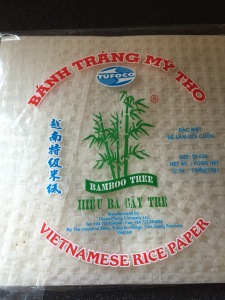 Cut the rice paper into strips 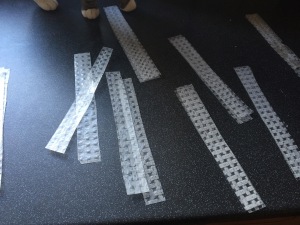 Get two strips of rice paper, put it together and put in water for about 3 seconds, then squeeze the water out of it with your fingers while pushing two pieces of paper together to create one.

Get the other ingredients and put them together in a bowl, mix well.

Dip the rice paper in the marinade and cover both sides 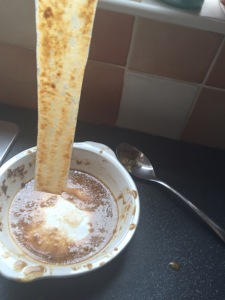 Place in non stick frying pan and fry on both sides for 1 minutes, turning with fork.

Transfer bacon to grill rack and oven cook on 180 for 12 minutes or until crispy.  (It’ll make your house smell all bacony too!)

Serve however you wish but you can’t go wrong slapping it on some bread with some Tommy K. 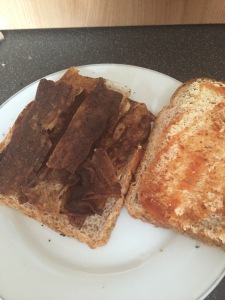